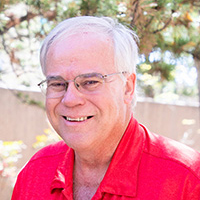 Greg Lanier (DL) earned his Ph.D. in English from The University of Michigan, Ann Arbor in 1986. He has served as a faculty member at The University of West Florida for more than 30 years.  During his time at UWF, he also served as chair of the Department of English and Foreign Languages from 1993-2000, the director of the University Honors Program since 2000, director of Interdisciplinary Studies from 2006-2009, head of the School of Fine and Performing Arts from 2003-2005, associate dean of the College of Arts and Sciences from 2006-2014, and, finally, he was the founding dean of University College in 2014.

DL is deeply honored to be given the opportunity to lead the Honors College at The University of New Mexico.  He feels that the many strengths and examples of distinction that characterize Honors at UNM have long stood as models for many others across the nation and hopes to be able to contribute to the tradition of lasting challenge and excellence that is central to the UNM Honors College.